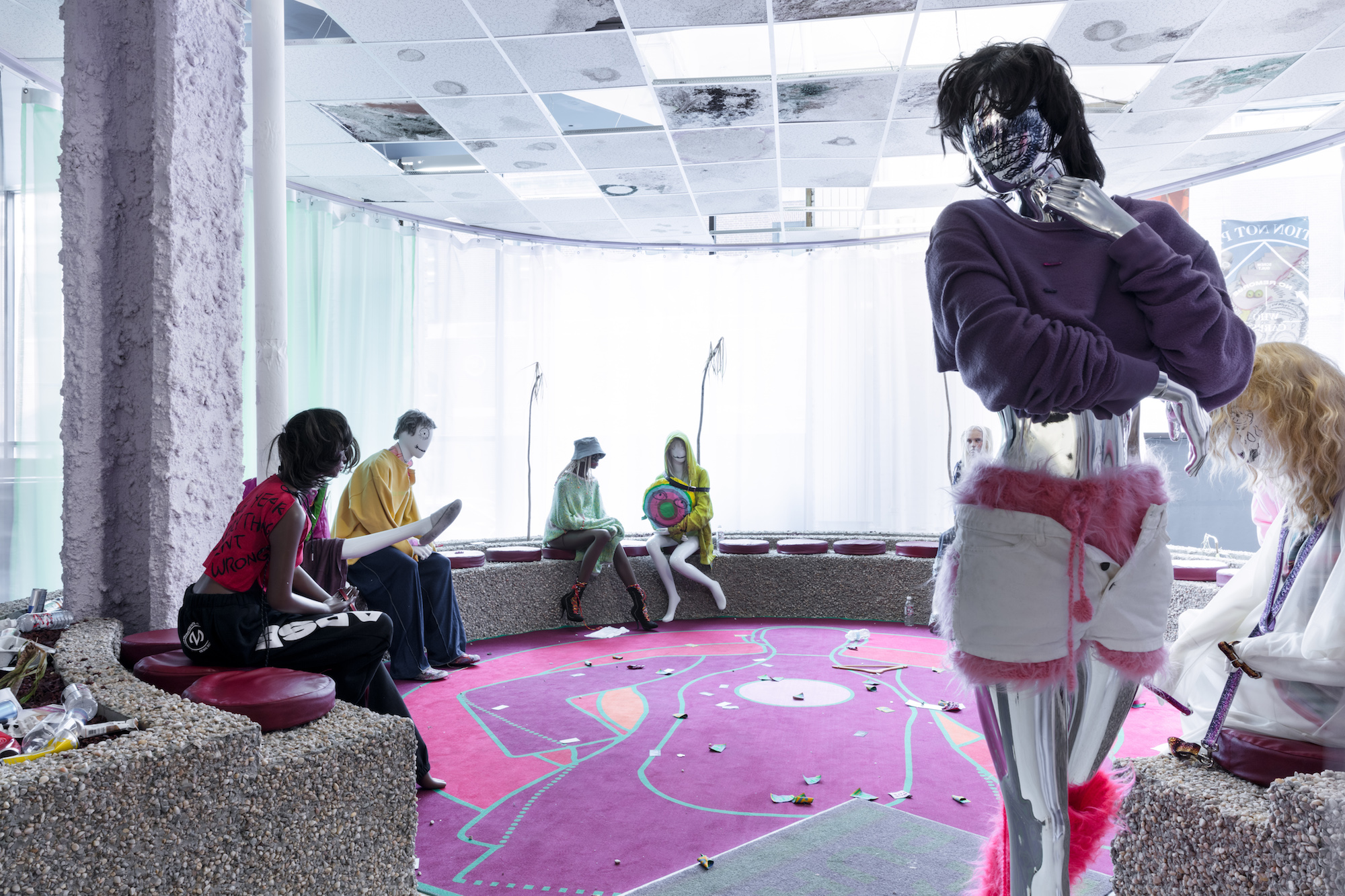 You’ve seen Avena Gallagher’s work before and you might not even know it. From the degenerate manikins in Bjarne Melgaard’s blockbuster exhibition, which opened at Red Bull Arts this past February, to the cover of Bernadette Corporation’s latest monograph, which tracks the collective’s activities over the past two decades, the New York-based stylist’s fingerprints are everywhere. A frequent collaborator of designers like Telfar and Eckhaus Latta and a regular contributor to specialty mags like Bad Day and Pin–Up, Gallagher spans fashion, art, film, and advertising. Still, she keeps a low profile. The plight (or appeal) of the stylist is being at once integral and in the background. Gallagher and I met up at Dimes Deli in Chinatown to talk semiotics, street fashion, and style nostalgia.

Whitney Mallett: What was your path to becoming a stylist? Was it always your plan?

Avena Gallagher: I wanted to be a fashion designer when I was a kid. My parents didn’t really approve of me going to New York. They wanted me to go to school at home at the University of Washington and become a nurse or something like that. So they basically wouldn’t support me financially. I came to New York right after high school with like two-hundred dollars. And I got accepted to Fashion Institute of Technology to go to the design program, but I didn’t have any money for the supplies. I was so young and didn’t really think that far ahead. I didn’t think about the fact that I’d have to buy books and supplies, so I had to drop out before I even started. I changed my major to fashion communications—something to do with advertising and magazine journalism. After like two-and-a-half years, I dropped out of that program and I started working in advertising in the art department. I was doing art direction. I was like nineteen or twenty. I quit that job because it wasn’t really fulfilling, even though I was making good money.

I was like, waiting tables, but I still missed fashion. Patti Wilson used to come to the restaurant I worked at. She’s a stylist. She was like, “How much do you make here? Come work for me.” I worked for her for like a week, but it was crazy. From that job, somehow I got hooked up with the assistant of Lori Goldstein, so I worked for her, also for like a week. It was really turbo. I don’t think I was quite ready for it.

I randomly met this photographer who lived in my neighborhood at the time—Martha Camarillo—and we started working together. She took me on these assignments for The New York Times Magazine where she would photograph, like, people who won the Pilsbury Bake Off, or bridge-playing card groups. We’d fly all over the country to shoot these random people in random places, and I’d style them in high fashion. These were regular people, non-models I’d never met before, who came in all shapes and sizes—but somehow, there was some high fashion to fit every person. We did a bunch of those jobs together, sometimes taking like thirteen flights in ten days. It was my introduction to styling, after those short assisting stints.

Although I never went back to pursuing my original dream of being a fashion designer, styling was sort of a compromise.

When you are styling something, you’re communicating, I guess, in a non-cerebral way. There are all these different signs and combinations that matter. How do you approach working in this kind of vocabulary?

There’s always a different process, because the projects are so varied. And although it is a non-cerebral form of communication, at least in my process, it does get kind of cerebral, because everything is a sign. Every action that you do, in terms of styling something—to add or subtract a piece, to button it or dress it—those are all pieces of information that amount to how a thing is read. You have to interpret how those things all add up, and what the impression might end up being, how that character or model might get perceived. I know a lot of stylists don’t approach things that way, but I end up thinking about all those things. I tend to notice, or sometimes focus on, the minutiae. How a person ties their shoes tells me things. I definitely put thought into things that are invisible in a photo, not sure why.

How do you think about trends? Do you have to consider the larger context of what’s trending, or do you just try to ignore it all?

I feel like I’m of the people and for the people. I don’t necessarily feel like I’m seeing trends before other people, although I probably am, because I am trained to, or whatever. I’m not exactly like a fashion stylist who wants to do projects based on trends. Certainly, I get assignments like that. But for me, the most exciting expressions of style are the ones that come from the most unexpected places—like the cool old ladies who collect cans from the garbage in Chinatown, or like my ninety-three-year-old grandma, who wears two baseball hats layered up so she can adjust the bills to block the sun when she is gardening, or when she accidentally looks like current Vetements. I love regular people. Or crazy people.

I find that it is a little unfortunate what the Internet has done to what style means. People see style pages online, and they’re like, instructions for how to dress on-trend. Even if you don’t do it intentionally, there’s so much of it around that it’s almost unavoidable. You see people walking down the street and they look like a shopping guide. Now people even know what a trend is. These are things that people didn’t really, consciously think before. It’s crazy. You see all these different prescriptions or different blueprints everywhere.

And then there’s still how regular people dress—but you can’t even really say “normal,” because now there is “normcore.” I feel like I read somewhere, looking back at 9/11, it’s now almost twenty years ago—if you look at photos from that day, people aren’t dressed very different from now. Not that much has changed, compared to 1981 to 2001, for instance.

I was having this conversation with Josh Kline about styling this video piece we’re working on. He’s trying to examine people’s nostalgic style referencing. So like, right now, people are nostalgic for the ’90s, and the ’90s were nostalgic for the ’70s. And so in the near future, people will be nostalgic for now. He was trying to discuss how we would express this style nostalgia, and what it came down to was that people are still going to look the same as they do now, twenty years in the future. It’s true that, as much as it changes, things now are really circular. And, the pool of ideas just gets smaller and smaller, unfortunately.

Are there certain archetypes, or favorite designers’ seasons, or other references you find yourself returning to over and over?

I am forever obsessed with historical traditional dress, pretty much from any culture. It just blows my mind how diverse everyone was when we couldn’t see each other—considering cultures from across the world were like thinking of aliens in space.

Obviously, styling is super collaborative. I’ve noticed throughout your body of work, you’ll often work with the same photographer on a small more artsy project, and then on a commercial thing. Is it common to build these relationships that span different types of projects?

I think I’m a little bit uncommon, just with how few people I work with. It takes me so long to get to know someone. There are a few people that I’ve worked with consistently, and we are still working together.

And beyond the relationship with photographers, you end up working with designers, artists, models, muses.

The other part of my job that I love, maybe even more than shooting and styling, is design consulting and working with designers—maybe because I wanted to be a designer. Picking fabrics and making clothes is really fun. Those relationships with designers are super important to me.

My entire job is collaborative. I can’t do it unless I’m doing it with other people. I feel like I’m kind of a custodian. I’m sort of like a service provider who’s helping to build or facilitate somebody else’s project. In that sense, my job is always changing. There are wildly different projects from an art client to a commercial client. I’m always doing something different. That’s why I like my job.

You just used the word “custodian.” As a stylist, you often don’t get a lot of credit, you are really behind the scenes. I’m not sure when people see an image they realize the impact the styling has had.

Definitely. I don’t mind. We often don’t get a lot of credit. Or some stylists get more credit than others. [Laughs.] Styling is not just about clothes. Sometimes, my job is to create an atmosphere, or to balance out some psychology in a team, or to weed out parts of an equation that aren’t contributing to its sum. Sometimes it’s really abstract. Sometimes it’s about communication through clothing.

But maybe when someone isn’t conscious of the way the parts were put together, it almost gives more power to the way this language can infiltrate.

I think so, and I think that’s another thing that kind of sucks about the Internet. These jobs have become really sensationalized and really fetishized. Things like styling, photography, and make-up artistry have become more apparent in an image, and it does sort of detract from what you said—when someone sees an image and they don’t know any of that. Maybe when it’s less conscious, it travels further if you don’t see those things. I think the real power in style is what is ineffable.

Whitney Mallett is a writer and filmmaker based in New York. She’s an editor at Topical Cream and her work has been published by The New York Times, ArtForum, Art in America, Nowness, ArteTV, and others.

Styling in all images by Avena Gallagher.