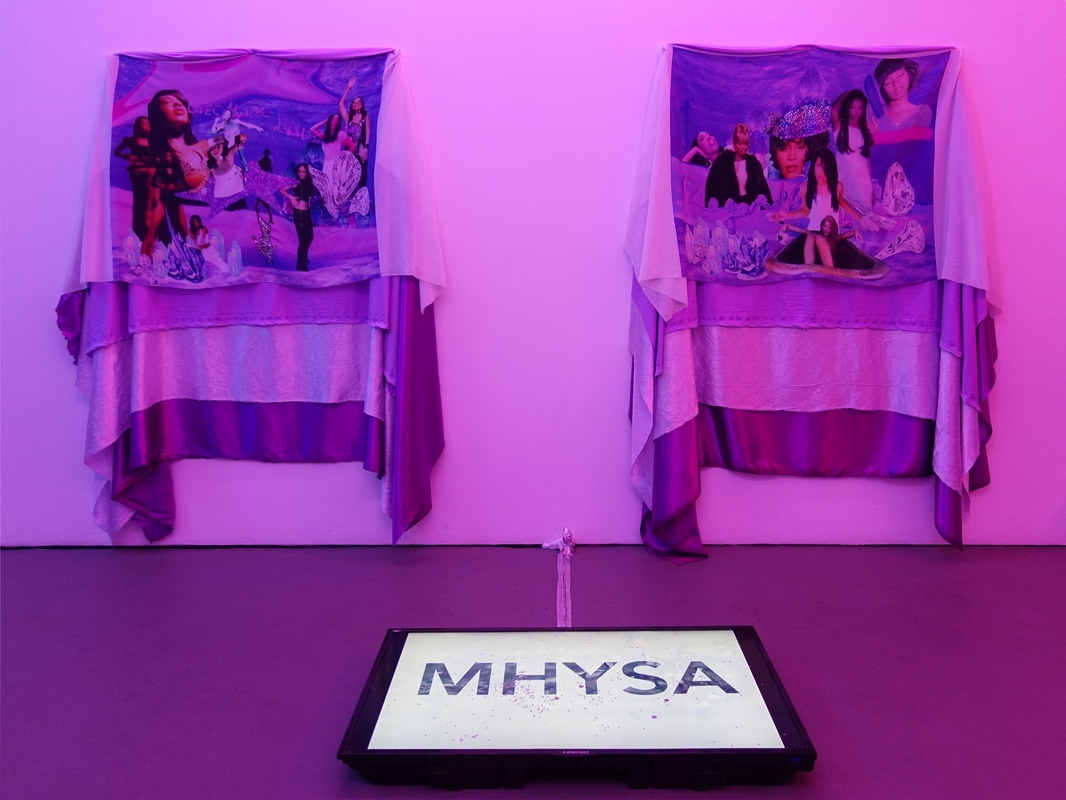 The political subversion used by three interlocutors with socio-political poise and life experience serves as a platform to approach abjection in the face of imperialism, as well as cultural healing in the knowledge of one’s past and idealized future.

These artists carve a queer space to nuance what it means to be Black and radical. The revolution does not always take form in grounded Black nationalist politics. However, it will always be partnered with the politics of desire, or more specifically, what scholar and activist L.H. Stallings calls “sexual decolonization.” This form of decolonization, famously termed “decoloniality” by scholar Walter Mignolo, is a system of knowledge intent on reforming the pedagogical dominance of the Western matrix of power.

MHYSA,  RAFiA, and Liz Mputu function avidly within this conceptual space. Through this, they employ a sort of “hierarchy inversion,” reminiscent of the political subversiveness broadly found in Afro­-diasporic expressive culture. Carolyn Cooper contends that this expressive culture has always been deemed by hegemonic social institutions as categorically “vulgar,” therefore “hierarchy inversion” is the idea of transforming the negative conceptualization of vulgarity into positive conceptualization. It is the subversion of turning vulgarity in the face of a contentious white gaze on its head. The beauty of Black feminism ensures that gender boundaries are questioned, disrupted, and reformed in organic manners. This avowal has much to do with the politics of subversion, a resistance politics that specifically inverts images of stereotypes into ones of empowerment.

Just as another episode of self-criticism, rotting introversion, and frustration from folks misunderstanding Black women reprogrammed within me the other day, some words I’ve seen time and time again from an angel on social media calcified: “be tender with yourself.” Those are the words of MHYSA, a deity of gentleness, hardcore sounds, Black queer visibility agendas, and one-half of SCRAAATCH.

The social media footprints of artists like MHYSA, RAFiA, and Liz Mputu are ever-resilient and unmoved. Through their publishing, Instagram presences, and music platforms, these artists convey an urgency to demonstrate cultural continuity, to employ uncensored philosophy and artistic expression, and to inform others about the prospective plight of the Black community, taking shape under decolonial parameters of political subversion and self-making biomythography. The social media call-outs of microaggressions, misogyny, misogynoir, queer invisibility, and unwarranted heteronormative gaze are what make the pot liquor of their Black femme “reads” of racist bs even sweeter. MHYSA, RAFiA, and Liz Mputu are each “shapers” (to borrow Octavia Butler’s term) of their futures and the future of Black women and femmes.

Most recently, MHYSA decks their song “Strobe” (produced by lawd knows of SCRAAATCH) with flash photography sound effects, minor chord synth harmonies, and synth claps in place of hi-hat rhythmic sections. “So many pics it’s like I got my own strobe light/that flash from the back got my ass lookin so right/so many pics it’s like i got my own strobe light/click click click click click.” The word “carefree” might describe this display of brilliant resistance politics, but even more poignant is the subversion of gaze: a declaration of Afro-diasporic beauty that demonstrates institutional play, a term they used in a recent talk at American Medium (the gallery where the artist recently presented the solo exhibition Lavendra under the name E. Jane). Their work “THOT FANTASY V” features reassembling of songs by WOC like Cardi B, Tamar Braxton, and The Pussycat Dolls, drenched in motifs of dualism through the fearless choice of sampled artists, sirens, dark rhythmic drones, and glass breaking, beckoning narratives of both urgency and refusal. I’ve taken their phrase “be tender with yourself” to heart and spirit on numerous occasions, especially knowing that, just as I do, MHYSA often deals with the daily microaggressions of being a Black femme on an exclusionary Earth.

Also a promulgator of an intimately caring social media “call-out” elegance that makes visible the contentions against POC, Black women, and Black people overall is ever-majestic RAFiA. Like MHYSA, she also works in various media and is the sole shaper of her own music production.

RAFiA’s most recent memento entitled, MARCH 19TH, begins with an enterprising presence by way of her name repeating in the rhythmic section of “ENGiNE,” followed by animated synths with modulator LFO cycle passes, and the killer first line, “Oh oh oh/I’m tired of this white shit” in a beautifully effeminate alto, as well as a sometimes tenor vocal range with rich vibrato. MARCH 19TH also features the desirous jungle capricious sounds of “Killin It Sells,” the cyborg-like electronic transmissions and transparent desiring yet conditional-ultimatum lyrics of “No Fucking Clue,” the upbeat interrogation of gentrification in “No Windows,” the resolute Brooklyn-made manifesto “4GETME,” and the call-out of racism, microaggressions, and gaze endeavors in “CALL.” RAFiA summons Blackness and creativity in an unapologetic manifestation, revealing the ostracisms of white supremacy while encouraging communal empowerment and self-healing.

The Internet presence of Liz Mputu, affably represented by Bete Noire 3 on Soundcloud, also assumes an experience of healing, with an addendum of indulgent interiority and radical Black femme transparency. Often, Mputu’s commentary of technoculture is both figuratively and literally wrapped around their body in the images they display.

Mputu’s sound art, a loving and honest affirmation of what it means to be human, complicated, and beautiful in those complications, is an arrangement of poetry, reflections, self-produced music, fast-cadenced witty rap, and warped samples. Mputu’s commentary memento, PRESSED BUT COPING CREATIVELY, accents background television sounds of the news, a quiet narration feature that one could link to what scholar and artist Kodwo Eshun calls “futures industry” or “forecasts,” a dystopic commentary of economic distress, global warfare, and other catastrophic events often dejecting the livelihoods of POC. Mputu’s Soundcloud also includes “Whoswatching,” a track that transposes Rockwell’s “Somebody’s Watching Me” alongside eerie cinematic sound motifs; the spoken-word piece “things I wanted 2 text redeem but worked over perfectly in my head instead as preparation 2 being Ur man Or something:,” which complicates the spectrums of Black pride and queer veiling (“I wonder the line between pro-black wokeness and I’m gonna exorcise the faggot out/Is there room for us my love?”); and “CyberSerenity X So Much More [Healz 4 U],” a cosmic and android-voiced mantra of spiritual alleviation.

Mputu, RAFiA, and MHYSA do not just promulgate the future of Black women and femmes, but expound on a rich and accessible past as well. It is to say that if one were to reach far enough into their past, they would see that they come from technologically agential people already. Femme Black Sci-Fi, as I like to qualify their work, is a way of encompassing ancient sciences, the way that Black women and femmes, among Black people generally and globally, have informed those sciences and even defied populist sciences. Femme Black Sci-Fi relies just as much on creating futures as it does on the trope of dystopianism. Whether through the speculative-fiction themes of disorder or through grounded theories of pessimism and plight, it considers postcolonial conditions as nuisance to intersectional Black progress. Femme Black Sci-Fi reveals the antics of colonial technology as much as it hones the promulgation of technological savvy. I channel these thinkers to qualify what we mean by humanism, nature, nurture, spirituality, tradition, and desire. Many sci-fi renderings of modernity show how colonial technology has had erased markers of cultural identity, which include agricultural customs, supernatural belief systems and subsystems, performances of sensuality and sexuality, and sartorial culture. It is to say, therefore, that all of the preceding aspects of diasporic cultural memory, including the desire for African-derived spirituality, is an essential part of feminism and humanism when Africanness is at risk of erasure. Mputu, RAFiA, and MHYSA are avid commentators of this.

Femme Black Sci-Fi also implies a way to talk about science on Black terms. Traditionally, the difference between sci-fi and fantasy is that science fiction is a fictitious story of something that is completely possible due to scientific innovation/possibilities, but perhaps has not happened or been proven yet. Because one can speculate how this science might be used in a situation not yet documented but possible through the combination of knowledge and imagination, stories of scientific and technological past become science fiction: it is a fiction based on real science. Therefore, many of the stories that are conceived of by Black people globally, whether it be in natural science, technological science, or spiritual science, are still conceivable. It is a way to discuss science on decolonial terms. Spiritual science, just like natural and technological science, is worthy of nuanced and rational renderings.

Among the much-warranted reads against hegemonic pressures, there is an equally warranted allegorical “softness” among these three artists. In RAFiA’s sartorial aesthetic, you’ll find hot pink hair and visible allusions to Baby Bop; you’ll find MHYSA explain on social media that being soft and/or tender is the key to survival and their art, in various hues of lavender; In Mputu, you’ll find that body transparency and interiority is the key to self-sovereignty. Black women and femmes are not a monolith; we are not to be painted with a thin brushstroke of stereotypes. Said interlocutors are inherently the possessors of the paintbrush, and the brushstroke is inclusive in all of its subject’s nuances. The face of Black femininity, Black feminism, and Black queerness is not limited: it is broad, yet definite and productively defiant.

There is intentionality in resistance; resistance does not always take the shape of proclaiming one’s individuality in the face of cultural proclamations. Instead, individual resistance can appear as honing the collective archetypal information of one’s ancestral past and present, even if that ancestral information takes place in the hoods of Black America, in order to create an ideal future of what resistance might look like in the face of hegemony. I like to call this refusal of hegemonic devices the “Profane Holy,” looking at the “Holy Profane” oppositely and finding spiritually grounded refuge in eroticism and beautifully warranted profanity. It is code for the urgency of cultural sovereignty, cultural continuity, and cultural survival. It is the urge to be recognized for achievement and, simultaneously, the leisure to be eccentric with or without deep politicization. It is in disidentification that a narrativizing of the history of oppression, Black plight, and an interrogation of social institutions can allow counter­hegemony to prevail.

It demonstrates that right beside a narrative of anxiety stands a community of oppressed and simultaneously resilient people that seek to re­-establish the culture of a powerful oral tradition through counter­hegemonic faculties. In this wonderful oral tradition, I find healing through MHYSA, RAFiA, and Mputu. When experiencing them through their artful Internet presence, my pain of introversion, self-criticism, and the misunderstood gaze of my Black queer identity becomes a bearable conversation.

Layla Ben-Ali is an artist and fourth-year Ph.D. candidate at the University of Pennsylvania, specializing in Ethnomusicology and Africana Studies. Her research assesses dystopianism in Black music. She is especially interested in Black women and femme artists whose works convey posthuman subjectivity through decolonial sentiments.