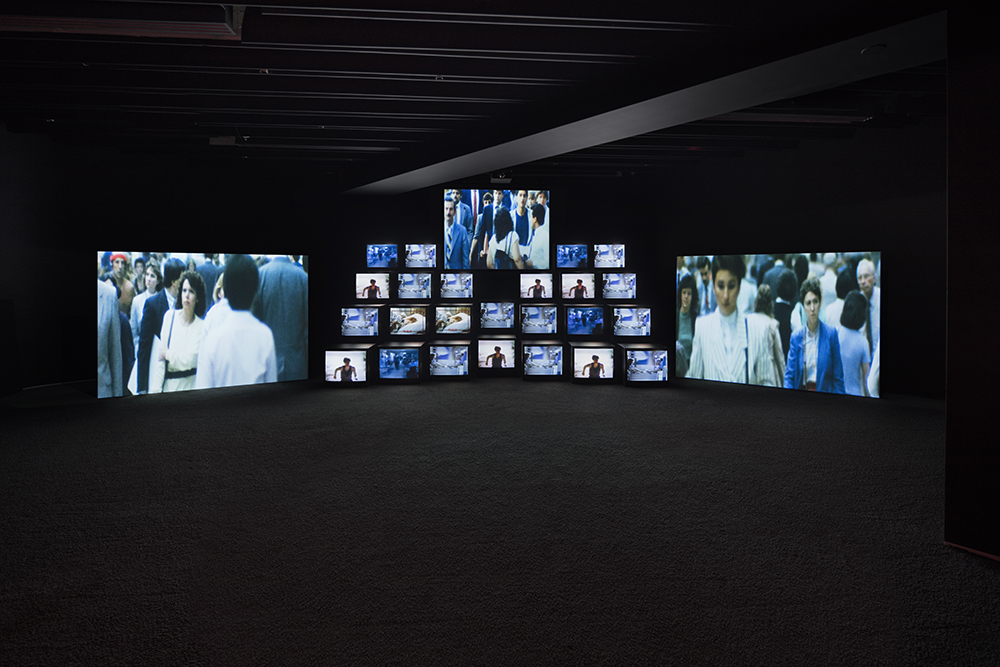 Gretchen Bender: Stepping into the Universe

Television is an envisioned surface. Up close, it’s a series of electronic particles, but as we step backward, it forms into a world that mirrors our reality, or an embodiment of a hyper one-echoing movement, replicating symbols, emotive and tragic. For Gretchen Bender, the televisual medium was an endless datastream to be dissected, paused, and played back. Bender described her work as “trying to face the violence of living in contemporary society with a clear eye.” With her retrospective So Much Deathless at Red Bull Arts, we have nowhere to step but into the channel flow. Here we see the artist bend media’s signal to expose the machinic vision.

This is the artist’s first retrospective since 1991 at the Everson Museum of Art. Though much of her work has hardly been seen in the past twenty odd years, the content conveys surprising familiarity. Titles from blockbuster movies, company logos, cultural icons, and even live television broadcasts radiate through the monitor-clad rooms. In works such as People in Pain (1988), a wall of over ninety silkscreen movie titles are printed on white neon through crumpled vinyl.

At the time of its original showing, these movie titles were upcoming releases not yet seen by the viewer, yet many would be released during the run of the exhibition. Then the audience would become familiar with the title, locate the narrative, and insert their own. Today, these titles are of course dated, but enable the same desire to find meaning with an added element of nostalgia. In Aggressive Witness-Active Participant (1990) and TV, Text, and Image (1986), we see Bender’s use of live television broadcast to suffocating effect. Utilizing a live feed of newscasts and daytime programming in a series of closely positioned monitors, we can no longer toy with the nostalgia of the medium or even the message, but instead, are thrust into the cacophony of our current everyday televisual language. A black vinyl phrase or name stamps center screen on each monitor feed. Phrases such as “I’m Going to Die” or “Living With the Poor” invade the manicured message and trigger complex relationships between the content and the viewing audience. An advert bearing a smiling woman facing the camera with the stamped phrase, “body ownership,” twists this spectacle and leaves us standing with kool-aid in hand. We aren’t just watching this, we are implicated.

Mark Jarzombek, in Digital Stockholm Syndrome in the Post-Ontological Age, states that “In the world of Being-Global, monotheism is dead… The gods in the new pantheon have names, like Google, NSA, Cyber Caliphates, Baidu, Yandex, HSBC, AIG, Kmart, ExxonMobil, Coca-Cola Company, Grupo ACS, Holcim, Industrial and Commercial Bank of China—all augmented by a host of lesser gods who control shipping, steel, corn, movies, gasoline, and copyrights, down to level of my DNA and protein consumption.”

In the late-20th century, the height of globalism saw immense technological change. Newborn digital mediums, telecommunications, networked social media, and smart phones were all just becoming. Bender could see a uniform envisionment that was being produced, reproduced, distributed, with elements of culture systematically secured. Logos of conglomerate corporate entities are made immediately identifiable and challenge the existence of alternative systems. The logo design of telecommunication giant, AT&T, was of particular focus to Bender. Coined the “Death Star,” this symbol would translate as Earth in bondage, like a fourth dimension lobbied within the pantheon. Works like AT&T in Slow Motion (1984) and Wild Dead I, II, III [Danceteria Version] (1984), with a soundtrack by Stuart Argabright, depict a fragmented electronic world in an endless recycling of speed and motion. We watch the graphic logo emerge from darkness into being, its language cementing. Today, in a post-globalized state, we are no longer simply watching the news, a YouTube instructional video, or a daytime drama. Instead we are interwoven in a media ecology, unable to parse the machinic vision from the human. In the endless cycle of televisual storytelling, we witness the spectacle of life and death without pause, only to be propelled back again into the cycle with the velocity of flying objects. Bender pulls back her re-calibration with the same violent force.

In Flash Art (1987) a single monitor plays back performances by female artists taken from MTV (think Janet Jackson, Annie Lennox, Bananarama, and so on), framed by reproductions of painted female nudes by David Salle. Here we witness (and/or envelope ourselves in) a dysfunctional dialogue of female sexuality and body ownership in an overwhelmingly misogynistic media culture. However, Salle’s nudes are then framed within a Barbara Kruger collage, Are we Having Fun Yet? (1987) I was admittedly feeling a grandiose middle finger to the gender-bent cultural media align, but realized that Bender wasn’t voicing triumph here. When asked to comment on Salle’s work and the field of sexuality and its images for Flash Art Magazine, Kruger refused to take a position, citing sexuality and its images as a complex field.

In this collaged visual representation, Bender shows us that the depiction of women in media is not in a singular act of exposing cliched representations of women on TV, as much feminist video at the time concentrated on, but that the language is continuously shifting, becoming ever more subversive, more sophisticated, more complex. To deconstruct the narrative, we need to evolve with the speed of the language.

Conscious of her materials, Bender’s exploration of the medium is not through the aesthetics of the carrier, but in the concentrated message. With the methodology of a forensic scientist, Bender worked within the particle make-up, extending out from the televisual to fourth-dimensional spaces, incorporating new technology and digital systems, as well as serial collaborations (as with Bill T. Jones/Arnie Zane, Vernon Reid, and Stuart Argabright). Her last work could be regarded as her most expansive, and as a follow-up to her immersive multi-channel installation, Total Recall (1987).

Bearing the title of the retrospective, in So Much Deathless we see a proposal for an unrealized performative work that focuses on the “theatre of perception,” complete with computer generated fractals, multi-channel moving screens, audio collage, and interactive video gaming. Paired together in the same room with this illustrated proposal is the work, Revolution (1985). The work is minimal by comparison: mounted steel, a singular fluorescent light, a film strip. For this work, Bender used cutting edge technology (in this case, a Mitsubishi printer) to print screenshots directly off television. The filmstrip bears the word Revolution.

Although expressed as a once radical,now sellable commodity, the word (and the work), exploits less for me its clear experiential commodification, and more its timeless, existential predicament. The hardware of the machine, as expressed with steel, frames a horizon line; In this case, the photographic medium of film heralding the technical image. Legible, but small, it mirrors an ever-constant societal yearning, within distance, yet out of reach. Almost ghostly, Revolution renders a collective envisioning, not of a tangible image, but of an imagined experience of before and after.

Gretchen Bender was not able to realize her last documented proposal. Her untimely death at the age of 53 cut short an all too prolific career. What she leaves behind is a body of work that cross sections philosophy, science, science fiction, anarchist manifesto, feminist zine, and death spectacle obituary.

Victoria Keddie is an artist, curator, and video historian based in New York City. She is the Co-Director of E.S.P. TV. Keddie’s video works are represented and distributed internationally.

All artwork © The Gretchen Bender Estate
Bibliography of contributing texts: