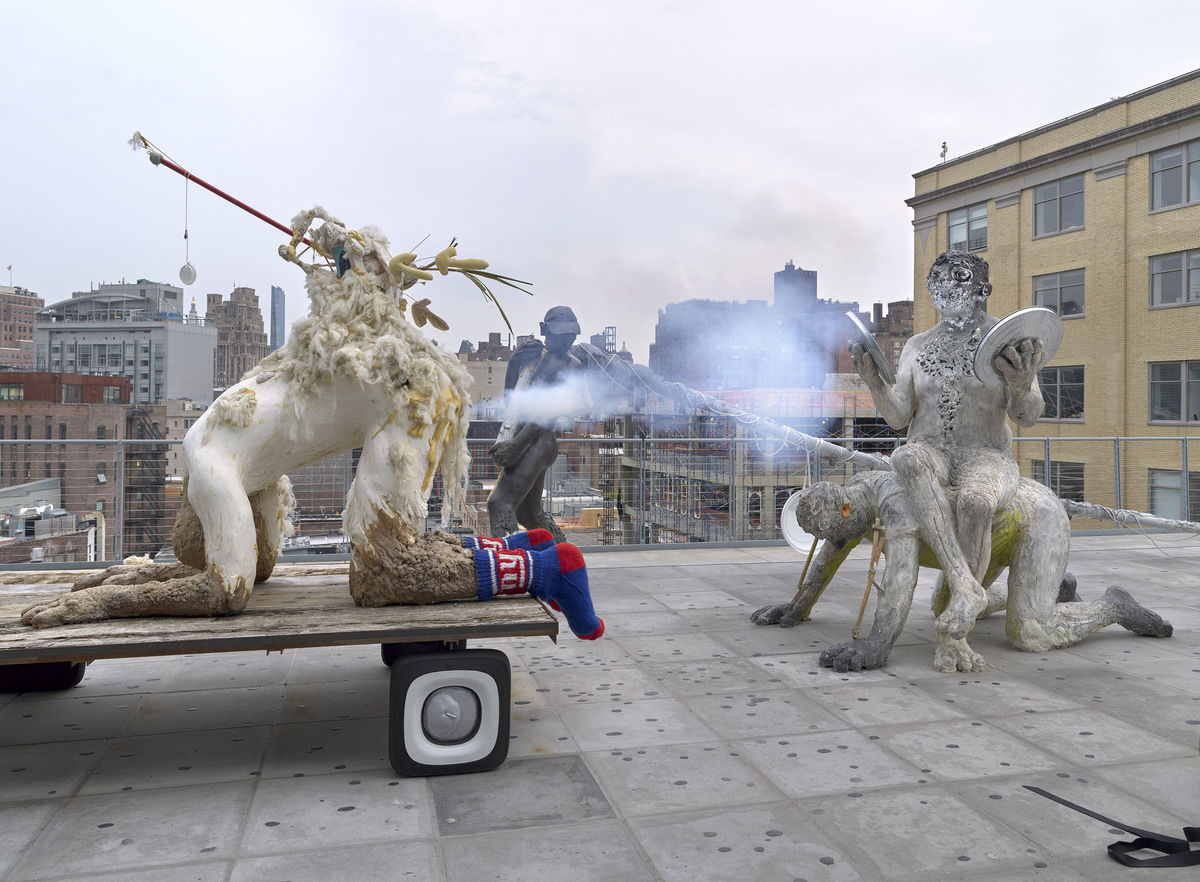 On Radicality, and Closing the 2019 Whitney Biennial

On the opening night of the 2019 Whitney Biennial, it appeared as though blue-chip critics knew all they needed to know about this survey of contemporary American art—it was boring. Not even waiting a week for the theoretical dust to settle, renowned art critics and lesser-known art writers alike hurled one of the worst accusations which can be thrown at any exhibition—that the work “was not radical and didn’t matter.”

After so much has been written about the exhibition, and as the closing weekend approaches, I want to take a closer look at a few particular criticisms, including the criticism that there is too much political correctness and a lack of radicality. I’d like to examine the exhibition’s impact and how it has held against such criticisms.

May 14, 2019 was the opening night for the much-anticipated 2019 Whitney Biennial. This installation was the first curated by two female-identifying curators, Jane Panetta and Rujeko Hockley, and was the most diverse Whitney Biennial to date.

Months of enthusiasm were soon curbed when the critic Linda Yablonsky, in her review for The Art Newspaper, patronized the curators as having had “good intentions” and wrote off the exhibition with an article titled, “Everything is good at the Whitney Biennial, but nothing makes a difference.” To whom it does not make a difference was not evident in the piece.

As other writers soon followed suit, the suggestion of non-radicality carried strange undertones, and these undertones were not lost on anyone who is aware that an almost entirely white-centered pedagogy is a problem in the art world. The problem was put on display for all to see in the opening critical statements surrounding the 2019 Biennial. This left the artists in the Biennial with the task of not only creating the art but also educating critics seemingly unwilling to do research when writing about pieces of art has with origins not exactly in-line with common talking points in contemporary criticism. Simone Leigh was one of the most vocal artists, triggered by the glibness of such influential critics’ reviews, on her public social media page.

“I’ve seen some preliminary thoughts on the Biennial and concerns about radicality. I have to say that if you haven’t read a single word of Saidiya Hartman or Hortense Spillers. And if you have no knowledge of Negritude or how it’s related to surrealism. If you don’t know who Senghor is, why would have anything to do with art?”

Now artists of color not only have to work twice as hard to get into an exhibition like the Biennial, but then they have to take on the task of educating a mostly-white, mostly-male art media landscape.

In the opening weeks of the Biennial, the word “radicality” became very important and very frustrating. It was used as one of the most alienating tropes of the white-centered art criticism playbook, sending the message of, “It’s not me, you’re just not cool enough.” The word is silly because it no doubt brings to mind a 1970’s New York, with G.G. Allin pissing in the street, but now is only a deflated concept which mostly exists as a fantasy of an old New York sold to tourists on St. Marks Place.

There have been opinion pieces which implied that the work in this survey museum was too PC. Artsy ran a review by Scott Indrisek, which followed shortly after the Yablonsky review, expressing that, “The Whitney played it safe. … There isn’t much here to quicken the pulse, with even the politically inflected works coming across as too polite for our current moment. And if one possible function of the Biennial is to act as a kind of cross-section of American artistic practice, this exhibition makes some puzzling choices.”

Indrisek should perhaps have better explained what is “safe” or “polite” about the Biennial while using John Edmonds’s depictions of black masculinity as a cover for his article. It also wasn’t clear what makes a work politically inflected as opposed to not; only extremely coded language was used.

It turns out that the 2019 Biennial has been one of the most “radical” (I hate that term now) biennials, on many different levels. Soon after the opening, Hannah Black, Ciarán Finlayson, and Tobi Haslett sent an open letter stating that artists should pull out of the Biennial due to the inclusion of Warren Kanders on the museum’s board. Kanders is the owner of Safariland, a manufacturer of military and law enforcement equipment and materials, including tear gas used by U.S. Border Patrol.

This public move by Black, Finlayson, and Haslett reflected a conversation that had already been happening among the Whitney Biennial artists before the writers coined the term “The Tear Gas Biennial”—and, for that matter, before the exhibition itself had even opened. As several of the Biennial artists started to demand the withdrawal of their works from the show following the publication of the letter, Kanders stepped down, and the State of New York itself made a public statement demanding that museum boards diversify or risk losing their funding.

Nevertheless, an argument could be made that Biennial artists this year have had their radicality, their political correctness, the meaningfulness of their works, and their personal intentions as a group held to a higher standard than any other American Biennial in recent memory.

In this Biennial, not only are the artists responsible for explaining the meaningfulness of their work to a white-centered art media landscape, but they are also responsible for rectifying the make-up of the museum’s board. It’s hard for me to make artists who have long been left out of the conversation accountable for the institutionalization of criminals on museum boards. How can you be left out of the conversation and accountable for it at the same time? How can this be both the most impactful and the least meaningful Biennial?

Lyndsy Welgos is the founder and the director of Topical Cream 501(c)(3).