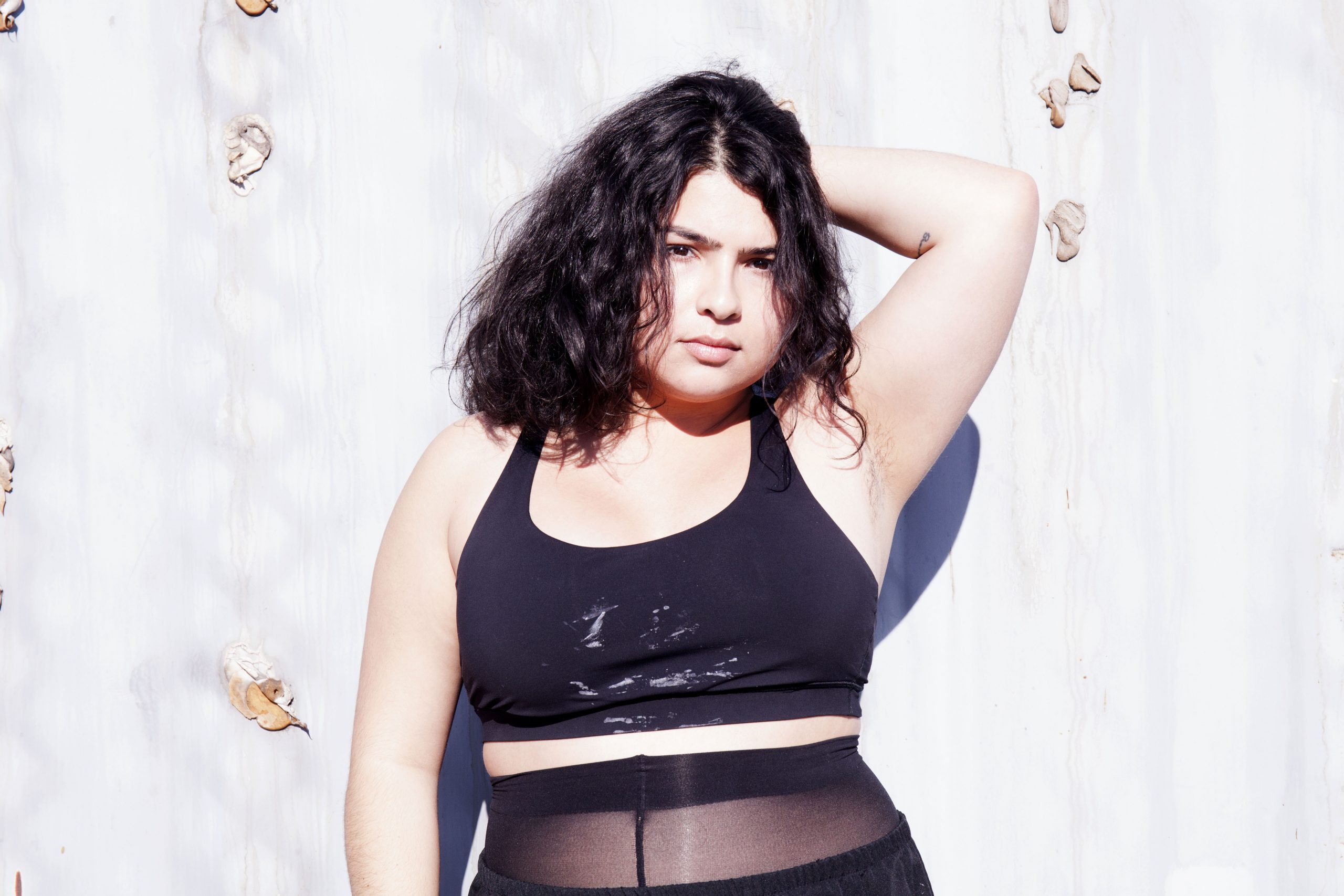 red price tags – run me along the edges of your fingers
figure out what’s slipped through capitols grasp,
is there ethical consumption under late capitalism
probs not
white rope – toss away from the pile, i’m over it.
actually, loop through belt, fluff and silver bangle,
attach and eat
foam core – i’m at the center, your centering in me,
reflections in the sand, toss me in the fluff

— Excerpted from “migration” by Ser Brandon-Castro Serpas, an instructional text used in the performance Crumbling World Runway (2017). This “poem” was safety-pinned to one of nine bags of materials, the constituent parts of a destroyed sculpture, prompting a performer to rebuild the sculpture in Serpas’s aesthetic vocabulary.

I was introduced to Ser Brandon-Castro Serpas in a dark parking lot outside of a gallery in Los Angeles. Her manner is warm and familiar. She shared her tequila with me and after laughing together, I asked her to show me pictures of her sculptures on a phone. Her work traverses media. Her sculptures evoke an organized chaos, they have holes to climb into, they are a mix of joy and anguish, chillingly executed. Her work points directly to the body and its absence. Fabric in her work is strung up, mangled, bound, pierced, and burned. An addition of tinsel might gesture at the absurdity of the action a grouping of objects has endured. Her poems detail physical experiences, her ceramics recall flesh. Serpas points to the agency of the body, its prescribed containers, and the cultural forces that limit and define us. Waste, change, action, momentum, struggle, and chance. What it means to live inside an active moment—at the precipice of acceleration and decline, between celebration and loss.

Serpas was a community organizer in Los Angeles before moving to New York City only a few years ago for school. After connecting with a friend about fashion and ideas on Tumblr, she decided to apply to Columbia University for Urban Studies. She fell into art-making, after being immersed in the fashion scene where she modeled for a number of designers, as well as interned for the well-known party matriarch, Susanne Bartsch. She describes this period as a sexy nihilistic time when she was performing: climbing on things, suspending herself, and exhibiting her body until it didn’t feel good anymore. She took up automatic writing and drawing to cope with a difficult winter, and when she started transitioning, her works took on a more resistant messaging. “I didn’t want to be looked at anymore,” she says.

Her works bluntly question the gaze, the status of the body, and the maker as object and image in art. Unlike most sculpture, her work doesn’t seem to fetishize its materiality and construction. If anything, her use of previously owned and abandoned materials interrogates the conventions of sculpture, highlighting instead the sheer availability of objects to us, our use and misuse of our resources, our bodies, our present. In spite of their seriousness and their state of crisis, Serpas’s works sparkle. They are as hopeful as they are mournful. They are a tipping point, a space where everything coalesces at once, for better or worse.

I spoke to the artist before she headed back to New York to participate in a group show Kathy Acker: Who Wants to Be Human All the Time at Performance Space, curated by Jenny Schlenzka and Bjarne Melgaard, where Serpas is interpreting some stuff from Acker’s Blood and Guts in High School. In April, she will be performing at Hauser & Wirth in New York with Puppies Puppies and India Menuez.

Zoe Koke: When did things shift to you getting shows at more established places?

Ser Brandon-Castro Serpas: The first artist who gave me the tools to see what I was doing as a practice was Donna Huanca. She was in residency at Smack Mellon in Brooklyn. We had worked together when I modeled for Mattie Rivkah Barringer and Amanda McGowan’s first show with Women’s History Museum back in 2015. Donna was designing shoes for the show. It was a performative exhibition. We were going to do it outside and then it started pouring down rain. We didn’t have a tent or anything, but luckily there was a Greek Orthodox festival happening in the neighborhood. And they had tents. So Mattie and Amanda paid somebody like one-hundred dollars so they could use their tent for an hour. Everybody was kind of performing, but I was playing with chains and jumping and stuff. Afterward, Donna was like, “I would like you to model for one of my pieces”—she usually gets athletic people to activate different works of hers. She was like, “we’ll keep in touch.”

Then a couple months pass by. I posted some sculptures I made for sculpture class online, and she messaged me, “do you want to come visit me in the gallery? Maybe we can work on some performance stuff.” So I go there. And she’s also interested in the sculptures. I have a bag of materials. So I bring it. And we make a piece together.

Donna was also hoarding at the time, and it changed how I thought about my own hoarding. I had always collected stuff like that, too, but saw it as a nuisance. When Donna moved out of her studio, she was like, “do you want a bag of my materials?” That started how I worked for the next year; she left me a bag of stuff she had hoarded. I had this pile, plus my pile.

I don’t like to buy anything. I’m like, if you collect weird shit, give it to me. People started giving me stuff. I got a pile from Avena Gallagher, who’s a stylist. My friend Hari Nef gave me stuff, and my roommate Serena Jara—like a bunch of people, a lot of girlfriends, usually trans people. Right now, I have twelve piles in Brooklyn I’m going to have to donate or get rid of, or find storage for.

Have you been making lots of stuff here in LA?

I make sculptures like I make drawings, like I make poems. The only medium it hasn’t translated to is paintings. I painted with makeup, though. Oil, it’s just like, weird. You have to take so many steps to not kill yourself.

I love your paintings. Are you burning things?

I’m really into cannibalization. I’ll make something that would be kind of good, and then I’ll be like, “actually, I’m going to make this again and use elements from different pieces, or reconvert it.”

Are you looking at lots of art?

I’ve never been one to go to a lot of galleries or follow art accounts. I didn’t grow up looking at art. I just watched a lot of TV and played the Sims. I was really into video games. I really like music videos and movie trailers, where everything happens in a few minutes.

The execution, it’s a controlled chaos. I’ll do a bunch of random shit automatically, and then I’ll fill it in with something that it could be, or it’s about to be. It has to start off with me being really manic. It’s a whole music video for me. I only work with music. I’ll be blasting it and I’ll do all these moves. I always had an athletic practice growing up, and now it’s shifted to how I make things. When I’m in my studio and I pick up something and I push something, in my head I’m like, I’m exercising.

It’s very physical and performative. Are the things you collect specific?

It’s things that I feel people kept for a reason—the emotional attachment. When I first collected stuff, I would buy these nice things at vintage stores or Goodwill, and I would try them on and they would rip in the shoulders because they weren’t made for my frame. It’d just be like, “oh no, I loved this thing.” I would keep it. I collect things that I’m heartbroken about.

Since the show in Miami, I’ve been like, “oh shit, I can do this with bigger things, like furniture and appliances.” Always stuff people have owned, though. I could never be the type that has an idea and then orders the stuff online to their specifications, or works with a manufacturer to make it. It has to be something that was owned, or people thought they had ownership over. Now I have the practice of going to a scrapyard, because I love collecting stuff. Preparing for the show in Miami taught me that I don’t really need a studio. I just need time in the space I’m going to show, and the ability to hire a moving truck.

Your objects seem to be climaxing.

You’re watching it, and one minute there’s like someone entering a room and doing a dance, and then there’s like a band playing on the stage, and then everyone is watching that person. It’s a visualizing thing. I’ll get a reading where people will say, “you’re like a witch, you get your power thing by making objects.” I am down for that reading, because I am letting go of a lot of emotion and hopes for things, in the moment.

There’s a conversation about sculpture happening in your work. It’s very clear to me that it’s a critique of sculpture in a sense, or a critique of the institutionalization of art on some level.

I’m just like, literally, “fuck all y’all”—but also at the same time I can do it better or dirtier, which I think is better.

Zoe Koke is an artist/writer living in Los Angeles. She is currently pursuing her MFA at UCLA.